Belgium
This statue represents the Batavian resistance hero, who fought against the rule of the Romans.
Want to visit
Undo
0
Been here
Undo
1 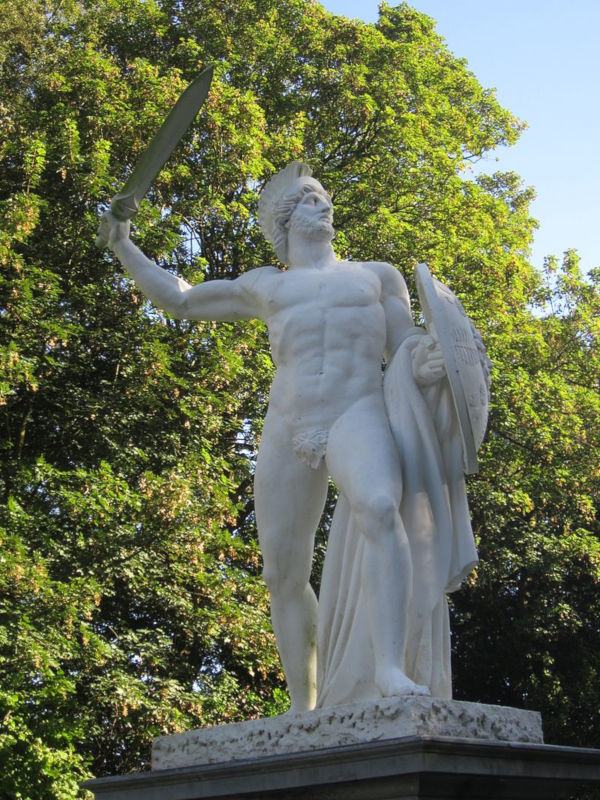 Claudius Civilis led the Batavian rebellion against the Romans in the 69s and 70s. The only knowledge about him comes from the Historiae of the Roman writer Tacitus. In the oldest manuscripts of Tacitus he is called Claudius Civilis, although historians assume that his name was Gaius Julius Civilis.

In the year 70, during the Batavi revolt, Civilis managed to capture a Roman fort in modern day Xanten. He promised the Roman soldiers free passage out but the Germanics attacked them only a few kilometers outside of the fort and destroyed the Roman garrison. The most important Roman officers were captured and gifted to Veleda, the unmarried and deeply respected seeress, because she predicted that the Batavi would win this revolt.

“You belong to the greater part once more, you are Germanic again! We therefore thank all of our  Gods and Tyr, our main God, and congratulate you. Finally you shall be free amongst the free. Until today the Romans closed off the rivers, land and in a certain way the sky, to stop all contact and traffic with us. Or it was to humiliate, us men born for weapons, further. Unarmed, practically naked, we would live under supervision and meet for a fee.

But so that our friendship and alliance may be everlasting, we demand that you tear down the walls of your colony, the bulwark of your slavery (even wild animals forget their virtue when locked up), that you slaughter all Romans within your bounderies. Freedom and slave masters do not easily mix. Let the goods of those killed be coded into a common store, so that no one hides anything or separates his own interest.

We and you must have the right to settle on either bank of the Rhine, as our forefathers did in the past. Nature has granted every man the privilege of light and day, not less has she given brave warriors access to every land.

Take back the traditions and customs of your own land again and cast out this luxery. This comfort gives the Romans more power over their subjects than their weapons! In this way you become a pure and unspoiled people, you forget slavery and become equally entitled, if not more powerful than others.”

In 1821-1822 the statue of Claudius Civilis was made by the sculptor Lodewijk Van Geel. The statue represents the Batavian resistance hero, who fought against the rule of the Romans. The statue was made to embellish the ornamental garden that belonged to the hunting pavilion of Crown Prince Willem Frederik van Oranje in Tervuren.

Due to serious damage to the statue, it was disassembled on May 13, 2011 and transported to a sculptor’s workshop in Vilvoorde. The exact copy was then made there. The original was preserved as an archaeological relic.